Red and gold is a classic combination but not many would have thought that Bollywood beauties would go for it at IIFA 2017. It just goes to prove that we are in for a whole lot of surprise this year with Katrina Kaif and Taapsee Pannu already starting the celebrations on such a bright note, especially when the unspoken rule at such big events is sticking to montone outfits. Both Kaif and Pannu went for an Indo-fusion look at IIFA Rocks but neither could impress us much with their sartorial choices. However, we think their beauty and hair game were right on point.

Kaif, whose film Jagga Jasoos opposite Ranbir Kapoor is scheduled to release soon was seen in an Abu Jani and Sandeep Khosla outfit. We like the shimmer and style of her gold blouse but the red ruffled sari looked really garish. 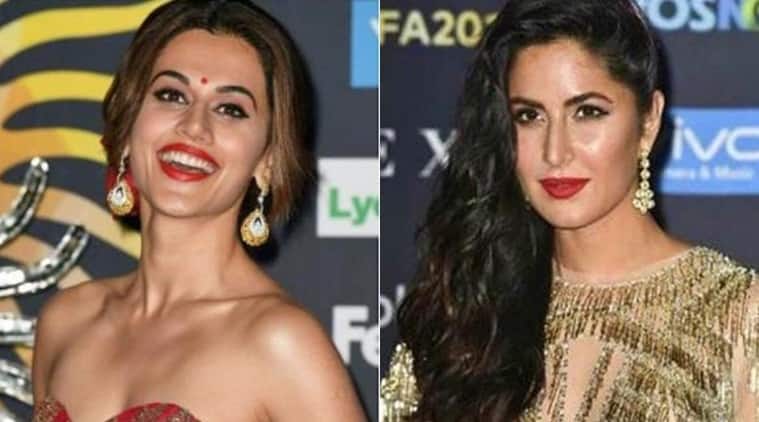 Even though we appreciate the idea behind pairing such an ususual blouse with a sari, we think a muted colour would have looked better here instead of the blood red one. Celebrity stylist Tanya Ghavri could have done better. But there’s no denying that she looked gorgeous neck-up. A big round of applause for the actress for trying something different with her make-up, especially her hair this time. The deep kohled eyes with the winged liner and red pout looked gorgeous on her and those side-swept soft curls added oomph to her look.

Taapsee Pannu, on the other hand, stepped out in a red gown by Kommal Sood and we think her outfit, make-up and hair was a mismatch. First things first, the brocade work on the flared gown is not something we particulary like.