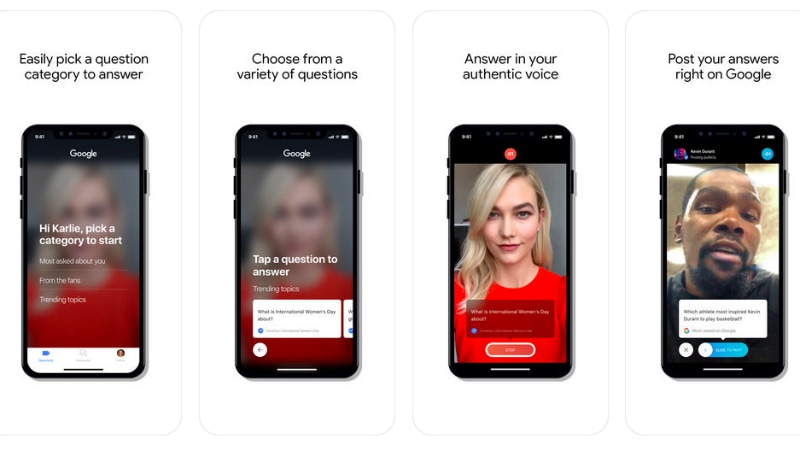 Google is introducing a new app on iOS called Cameos that will allow users to tune in to video responses from their favourite celebrities, sports stars, politicians, and local businesses. With the help of this app, users can record video answers to their most asked questions on Google. Following that, whenever someone searches for them on Google, the video will pop up to offer a personalised experience. Cameos on Google is currently available via invite only, which can be requested by installing the app from the Apple App Store on any iPhone, iPad, or iPod Touch running iOS 9.0 or above. File size is about 33.4MB.

With the iOS app, registered users will also get new questions about them regularly in order to help make their content more relevant and timely. Viewers can watch the videos right in their Google feed, once they search for the same questions that have been answered. As per the official app landing page, celebrities such as basketball player Kevin Durant and model Karlie Kloss are some of the initial testers for Cameos on Google.

Cameos seems to be an extension of a Search feature for celebrities to post selfie-style answers, which Google first launched in December last year. With testing in the US initially, this feature allowed popular celebrities to upload selfie-style videos of themselves answering the most popular questions about them on Google Search.

The feature is slightly reminiscent of Instagram’s Questions sticker that was released back in July. However, Cameos will be much more publicly visible and have the potential to expand Google’s prowess as a social networking tool.